York
I ventured up to York to meet the All The Stations people. Surely such a simple task would cause me no trouble?
excursions 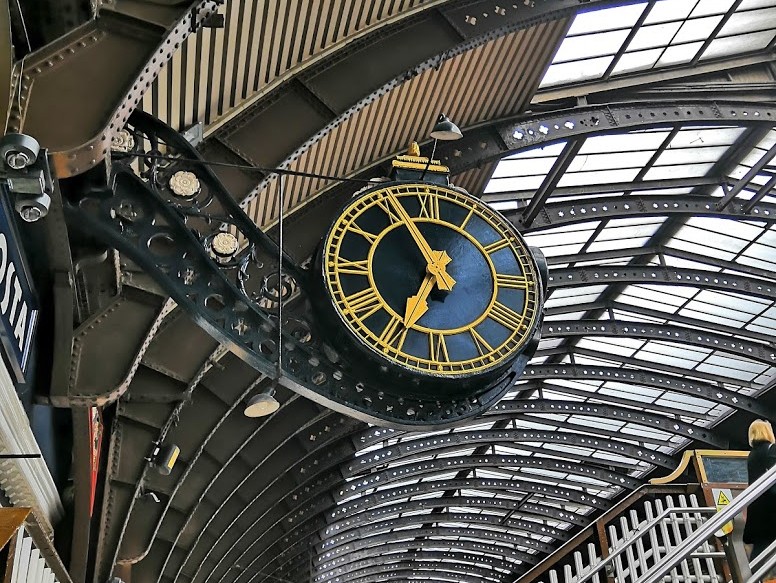 On one of my many Facebook trawls, I discovered that the All The Stations people were going to be doing a book signing at the National Railway Museum! A signing for a book that I already owned! I checked my calendar, and decided that it was worth giving myself a day off revision for.

But trains to York were quite expensive! So I turned to my trusty new friend, the Split Ticketing website. It turned out I could shave a fair deal off my fare by splitting at Derby and Sheffield - how convenient! But upon closer inspection I found that I could save even more by tweaking the trains I got, giving myself a two hour stopover in Sheffield. Clearly I had perfected the art of ticket splitting.

The day rolled around. But there was more than York on my mind - it was also the day that the Proms tickets went on sale, and I wanted to go to the Planets one. The website opened at 9am, which was slap bang in the middle of my journey to Derby! Nevertheless, I remained optimistic about my chances, and set off on my adventure. 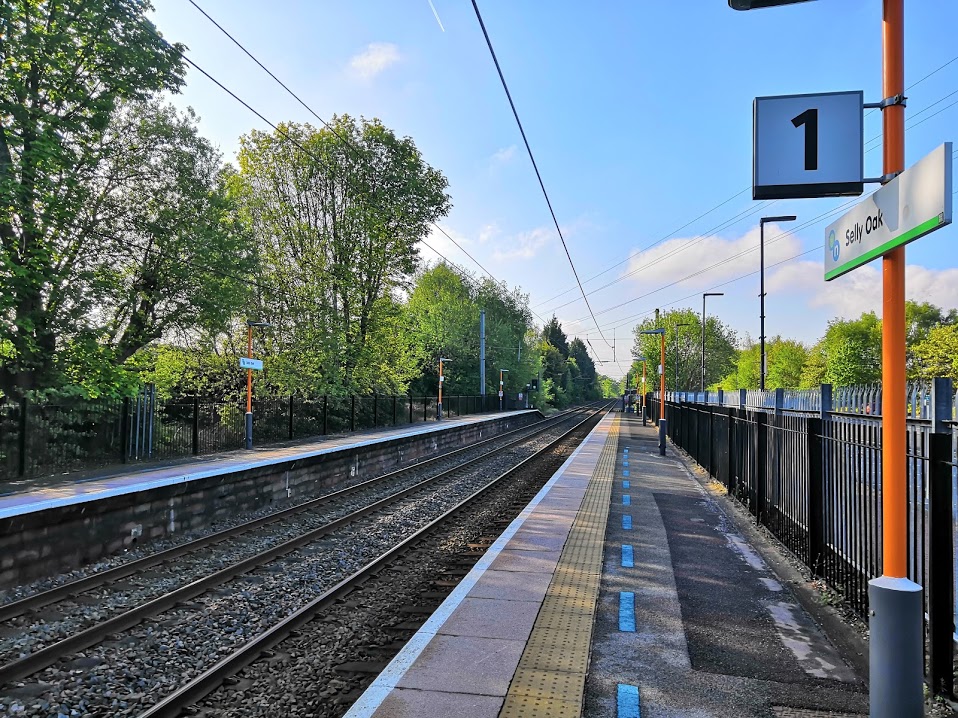 There was a man sitting in my seat on the Derby train! But I promptly sent him on his way, before realising that I'd given myself an inferior window seat and really should have just gone for the seat in front of him. But it was too late to change now!

The clock struck 9, and I immediately started pummelling the Proms site with HTTP requests. But so was everyone else in the country! At first I couldn't even get into the queue, and when I did I was languishing in 11000th place. This meant I had to keep my phone open on this tab at all times, while juggling switching from the CrossCountry wi-fi to the Derby wi-fi to the East Midlands Trains wi-fi, which expired after 15 minutes so I had to fall back to mobile data. At one point the queue just stopped moving for a good 10 minutes, causing me much unnecessary stress, and there was also a particularly hair-raising moment when we entered a very long tunnel and my signal decreased to nil. Would I lose my place in the queue? But we soon emerged and my place was safe. Everything was going according to plan! 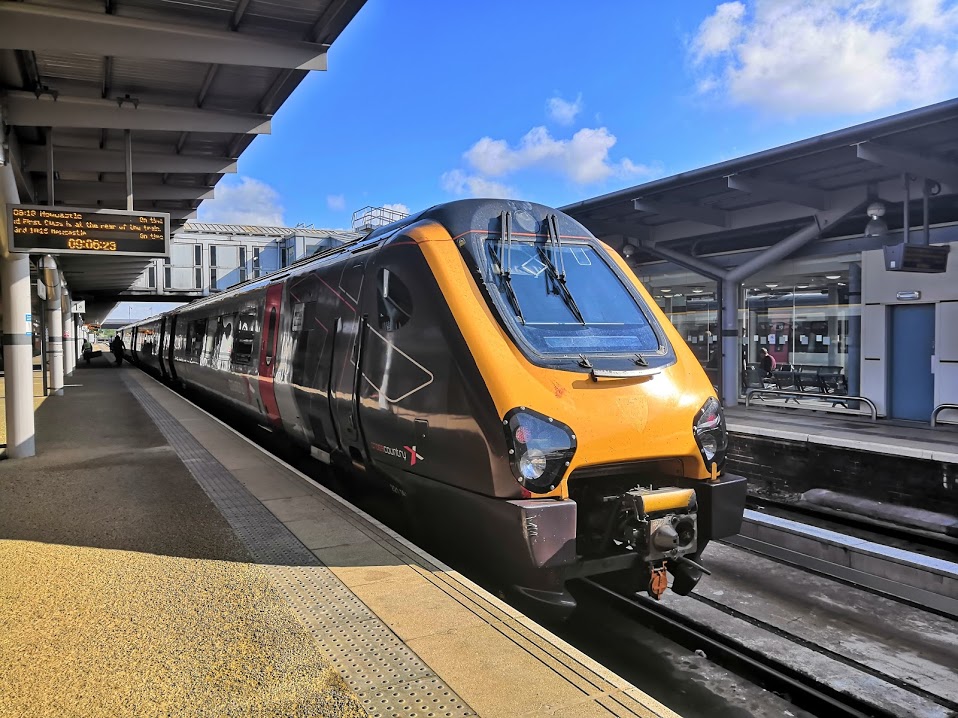 My first experience on East Midlands Trains was a pleasant one, except that the reservations weren't actually in place and I had a table seat, facing some people! I ensured that I did not make eye contact with them for the entire trip.

When we got to Sheffield I was 6000th in queue, and I began to get cocky. Having successfully pulled off several tab-wrangling manoeuvres earlier in the day, I switched to the camera and took a picture of the train I'd come up on. But then - disaster! I switched back to Firefox and the page refreshed, booting me back to 13000th in the queue. I audibly gasped and feared that my plans may have been scuppered.

With my phone still in my hand, I ventured out of Sheffield station and went exploring. I climbed some very steep steps and followed a path and a road until I ended up at the Norfolk Heritage Park, thoroughly out of breath from all the uphill walking! I was a little confused since Sheffield is definitely not in Norfolk, but I elected to ignore this small fact and wandered around.

I had reached 4000th place in the queue when my worst fears were realised - the Planets Prom sold out. This was quite disappointing but saved me some money so I managed to get over this crushing loss. With my phone usable again I immediately formulated a plan for the rest of my stop at Sheffield.

I made my way to the nearest tram stop and waited for the next one to arrive. My attempts to photograph this tram predictably failed and it whooshed past me, leaving me with a blurry picture of its side. Nevertheless, I boarded and was immediately sought out by the ticket man. I asked if I could pay by card and was shot down - I now understand why the north needs more funding - so I was forced to pay by cash. Fortunately I had the £1.80 required in coins otherwise I would have had to use a £20 note, and likely receive no change! 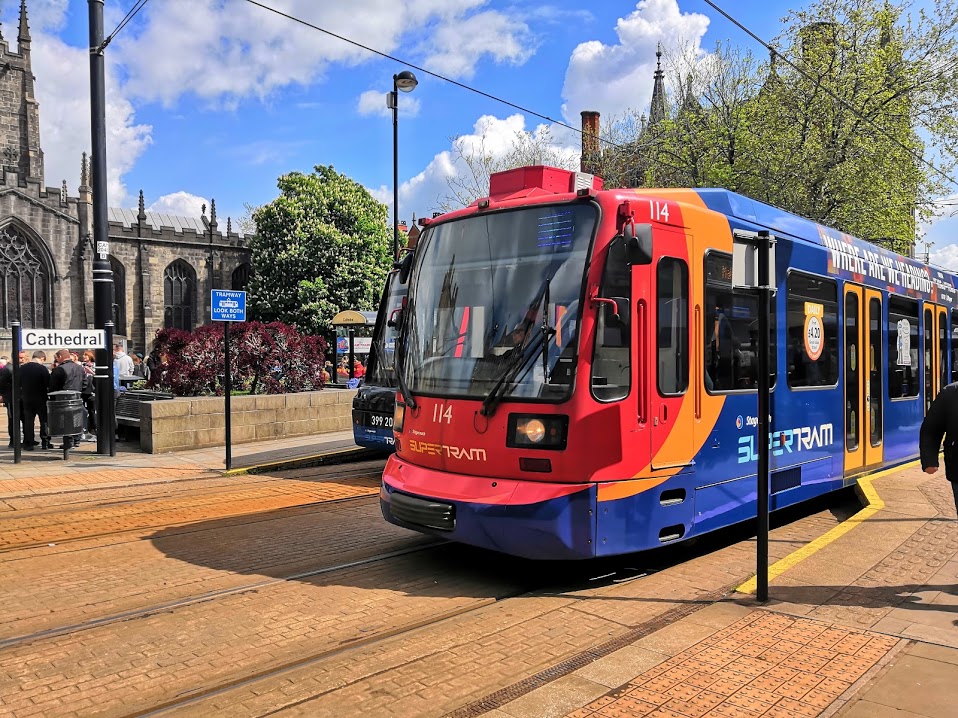 I finally managed to get a decent tram picture

I got off at Cathedral, and immediately went into tourist mode and started taking pictures and getting into people's way. Then I set out on a slow walk back to the train station, getting some more tram snaps (of dubious quality) along the way.

Arriving at the station with plenty of time to spare, I spent the last 20 minutes wandering around and taking more pictures of trains, which is basically all I ever do. I discovered to my delight that I would be riding a Pacer to York - normally something to groan about but perhaps the novelty hasn't worn off for me yet. 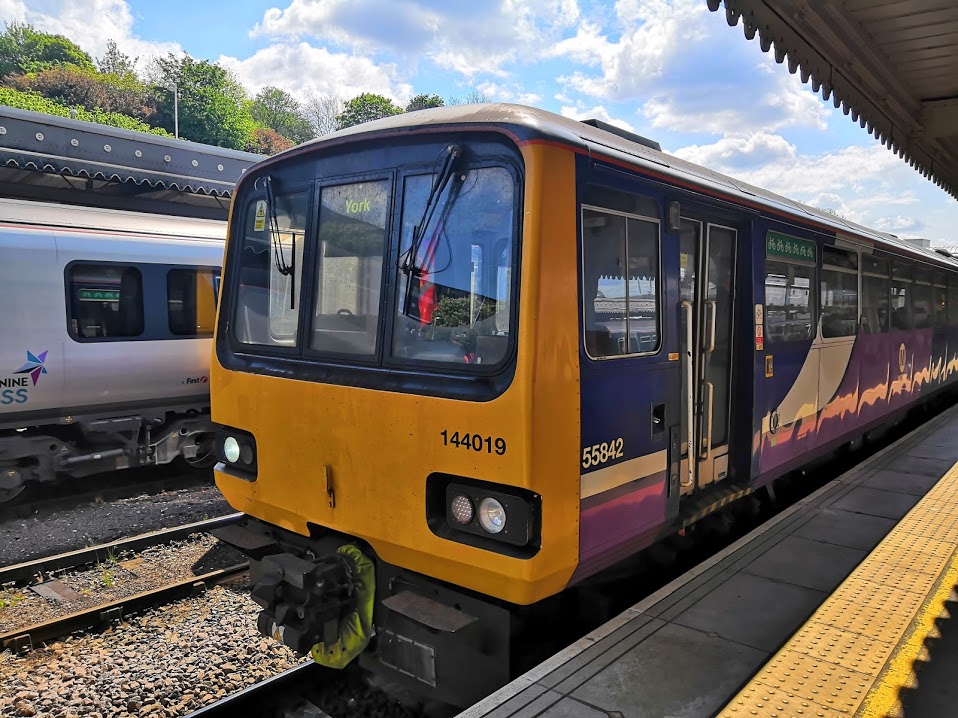 The journey up to York was a lot more comfortable than I expected - perhaps Pacers get a bad rap for no reason (there definitely is a reason). I found it rather pleasant, as if I were riding a bus into town back home, although I would imagine it gets worse if there are actually other passengers on board.

We made it into York on time, after racing another train in (we lost). I ventured immediately to Burger King to get my lunch (for an astoundingly high £7.19) and then made my way to the railway museum. After awkwardly declining to donate to the lady at the desk (I did later, honest), I walked to the Main Hall.

And there they were - Geoff and Vicki! I was overcome with awe and nearly went over right there and then. But then I discovered that there was a queue you had to join. And it was a very long queue. I totted up my options and decided to come back later, after looking around the museum a little bit. But then another disaster occurred - the queue was closed because it was too long! 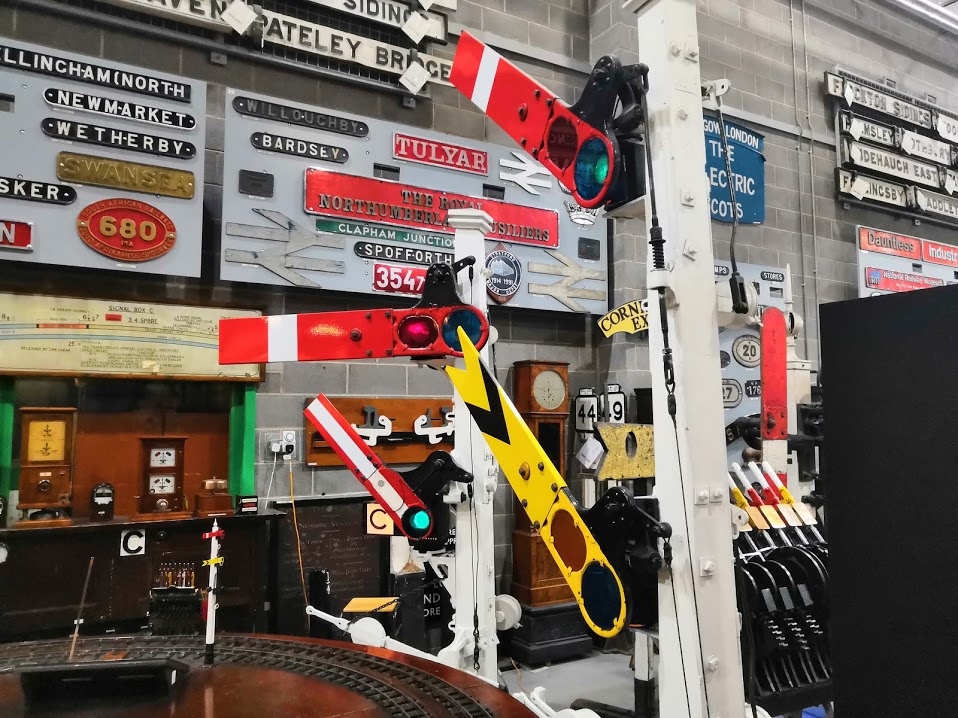 Dismayed by this turn of events, I continued on my tour of the museum, even taking a ride on the miniature railway! But soon I had seen everything so I went on my way. The queue was still very long when I left, so maybe I'd made the right choice not to join!

There was still all of York to explore! And I had a very important first destination - the Shambles. After a particularly shambolic attempt at finding it, involving many wrong turns and ,a lot of backtracking, I managed to find it. Of course my first course of action was to find a fudge shop. I was tempted into Fudge Kitchen (purveyors of incredibly high quality fudge, as tasted by me in Oxford!) by the promise of free fudge, but had to awkwardly leave to go to another one without letting them know that I was betraying them. It turned out that I probably should have stayed there, as the lady in the Roly Poly fudge shop thought I was an idiot when I asked how much fudge was actually in 900g (do people know this?). I left with a small selection of a variety of flavours for the reasonable price of around £5. I also ducked into a sweetshop and came out with £5 worth of rhubarb and custards, the greatest piece of confectionery known to man. 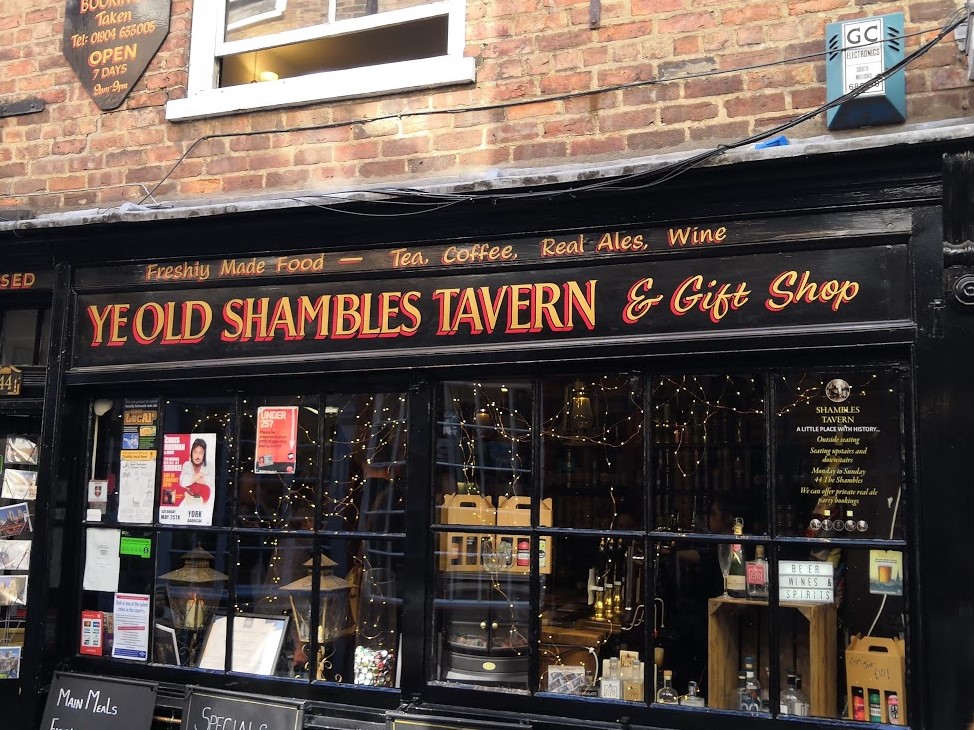 As I negotiated the remainder of the Shambles (which was itself shambolic due to the sheer number of people around), I looked up where I should go next. I popped into Waterstones to purchase a book (a theme common to these exciting excursions!) and also stopped off at a music shop to flex my piano playing muscles (I wasn't very good). Then it was time to set off on a walk around the city.

I first wandered around the Museum Gardens and checked out St Mary's Abbey, which was very impressive (but it's just like the ruins Malmesbury Abbey but more mainstream really). I stumbled across a map and had a chance to get bearings, and noticed that walk leaflets were available from some sort of visitor's centre - excellent! But I googled it and it had just closed that very minute! But it turned out there was another one at the train station, and maybe this one would be open. 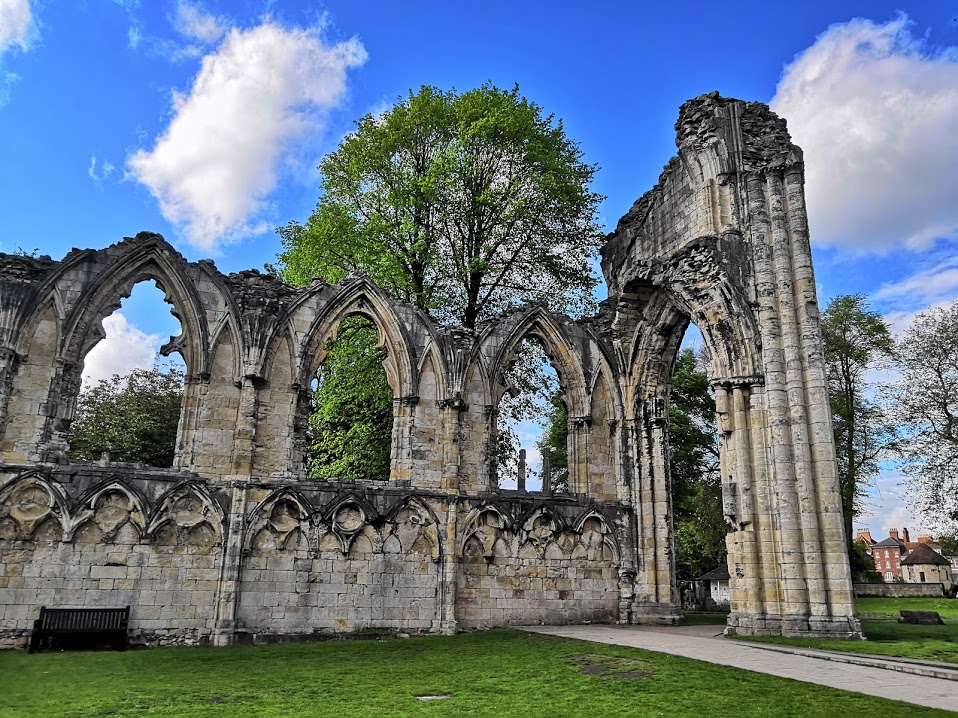 I was very nearly at the station when I discovered the city walls. I didn't even know York had walls, but apparently it did and they were some of the most complete in all the country! I now had a new goal - walk all the way round.

The walk itself was a fairly simple affair, winding around the city. There was a slightly hairy moment when the wall ended and I had to find the next bit, but went in completely the wrong direction! Luckily I found it again and continued the journey. I also ascended the hill to Clifford's Tower, only to find it cost money to get in and last entry was half an hour ago anyway, so I descended pretty sharpish when the lady glared at me. 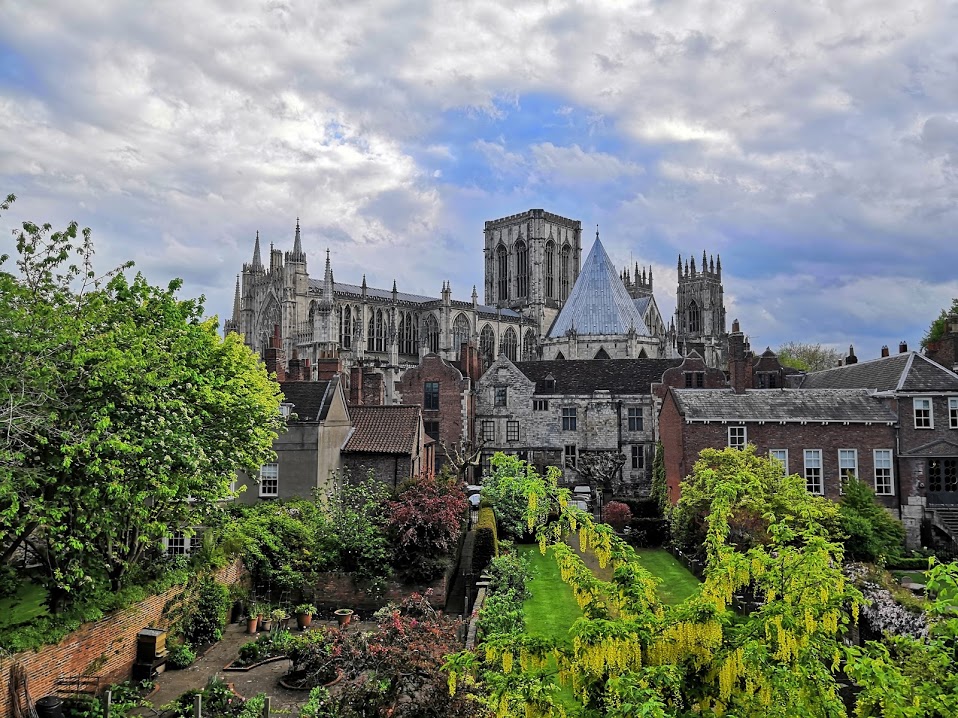 The Minster from the wall

After completing the wall walk, it was finally time to return to the station and wait for my train home. I purchased an emmental and mushroom toastie from Costa, which didn't really taste like anything but filled me up anyway, and took some more train pictures. To my surprise, a Pullman railtour even rumbled through the station!

Eventually my ride home arrived, and two hours later I emerged at New Street. But there was one last trick up fate's sleeve, as the train to Redditch suddenly changed from 'On time' to the dreaded 'Delayed'. A Bromsgrove train arrived ten minutes later so I sneakily changed tacks and boarded that one, but then it was held to allow the delayed train to pass, so I'd played myself. At least I'd got to sit down!