George Kaye
GitHub
Blog
GitHub
Blog
Bad Times at the El Royale
On an otherwise uneventful Wednesday, Todd dragged me to see a film about a hotel. I was immediately suspicious that this might actually be a fabled 'edgy film'. Was I right to be concerned or would this actually be a fantastic feature length episode of Four in a Bed?
19 Oct 2018 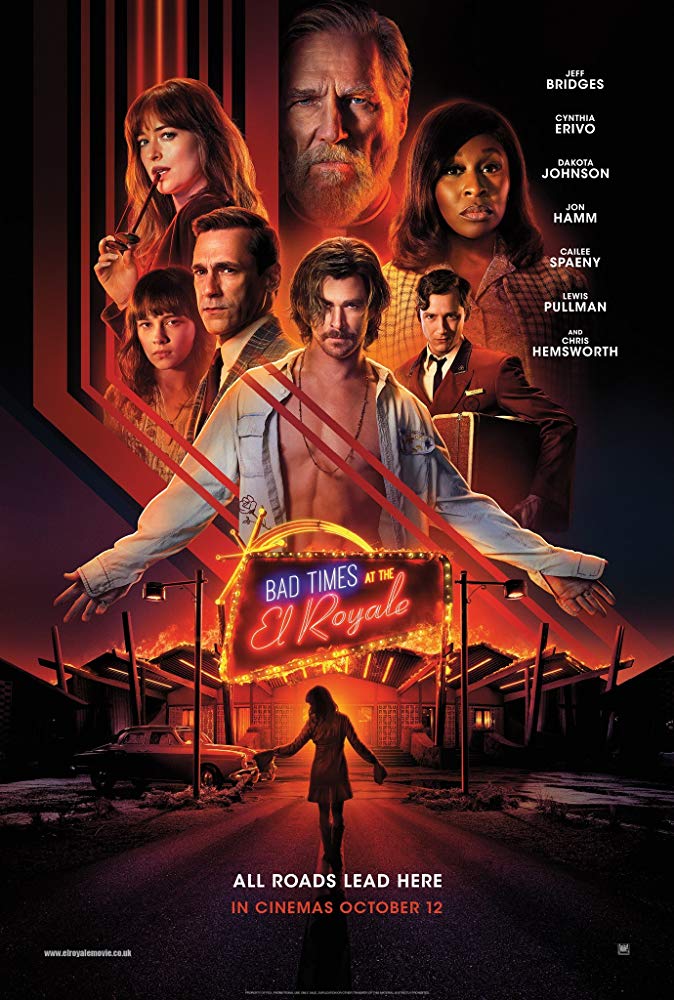 I had planned a peaceful night in on Wednesday 17th, but Todd had other plans. Apparently there was this new film out called ‘Bad Times at the El Royale’ and he was going to see it. Over soup in Sloman he extended an invitation and I proceeded to not commit for a good 24+ hours, causing great irritation to Todd and great amusement for me. Eventually I caved when a trip to the new Nandos in Selly was suggested, as you can’t really turn down a Nandos. 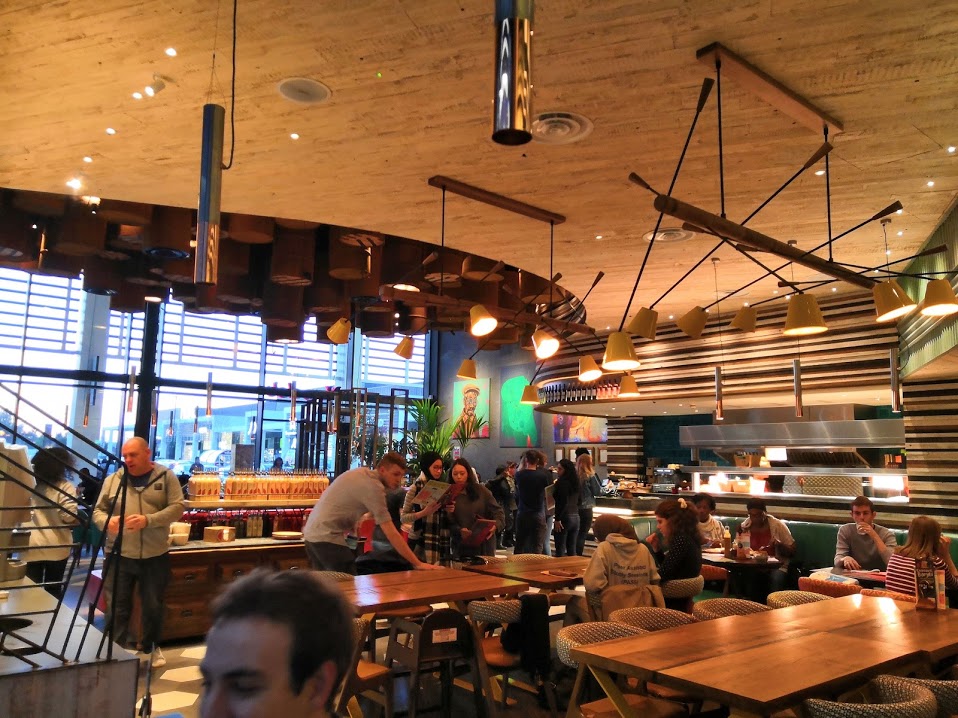 The new Nandos, and Owen’s head!

Despite visiting the retail park twice the day before (for spooky purchases), I still overestimated the time to get to there and arrived with plenty of time to spare. Eventually the rest of the crew turned up - Todd and his usual partner in crime Owen, along with his other friends Freddie and Fran. I feared that we might not get a table as it looked quite busy, but it turned out there was space for us right at the back! Unfortunately I chose a seat right behind a pillar and it was impossible for me to leave the table if Freddie didn’t move as well - had I needed to make a speedy exit I would be severely hampered! Luckily this wasn’t the case and all my exits were performed in a calm and relaxed fashion.

To my delight I discovered that I had a green reward sitting on my Nandos card! Although I’ve been going to Nandos for three years now it’s only recently that I’ve managed to understand the rewards system - and just as well because I wasn’t going to pay £3.70 for some strips of halloumi. After standing in queue for a fair while, I ordered (without forgetting my table number), filled up my glass with a sizeable amount of ice and Fanta, and sat down again. The halloumi bites arrived in good time and although the presentation left much to be desired, they did taste pretty good. Nothing can compare to the Soak battered halloumi though, may it never be forgotten.

My incredibly well-presented halloumi bites, courtesy of a green reward.

Otherwise the Nandos experience was fairly regular, although Todd fell foul of a particularly spicy batch of hot sauce and struggled to finish his meal. As always the creamy mash was incredible and all in all I would place the experience as one of the better Nandos in my time. I also earned an orange reward, not that there’s ever going to be a time when I would want to use it. Can I swap it for two plates of halloumi bites instead?

It was time to leave for the cinema. There was a sudden conflict as we decided whether to walk to Selly or University station - eventually we settled on University as we wouldn’t have to sit on the train for an extra two minutes. On the journey a disaster happened - Docsoc had attempted to show the next episode of Doctor Who in the Rosa Parks Room but had fallen foul of the Guild’s speaker request form system, meaning they couldn’t show the episode! [1] Since I hadn’t been intending to go this was quite funny.

At last we arrived at the Cineworld on Broad Street, but not before Todd and Owen had got the giggles at some girls dressed up for a night out, a sketch that confused me a great deal. It was time to settle down for 141 minutes of a entertainment, plus an extra 30 of advertising. 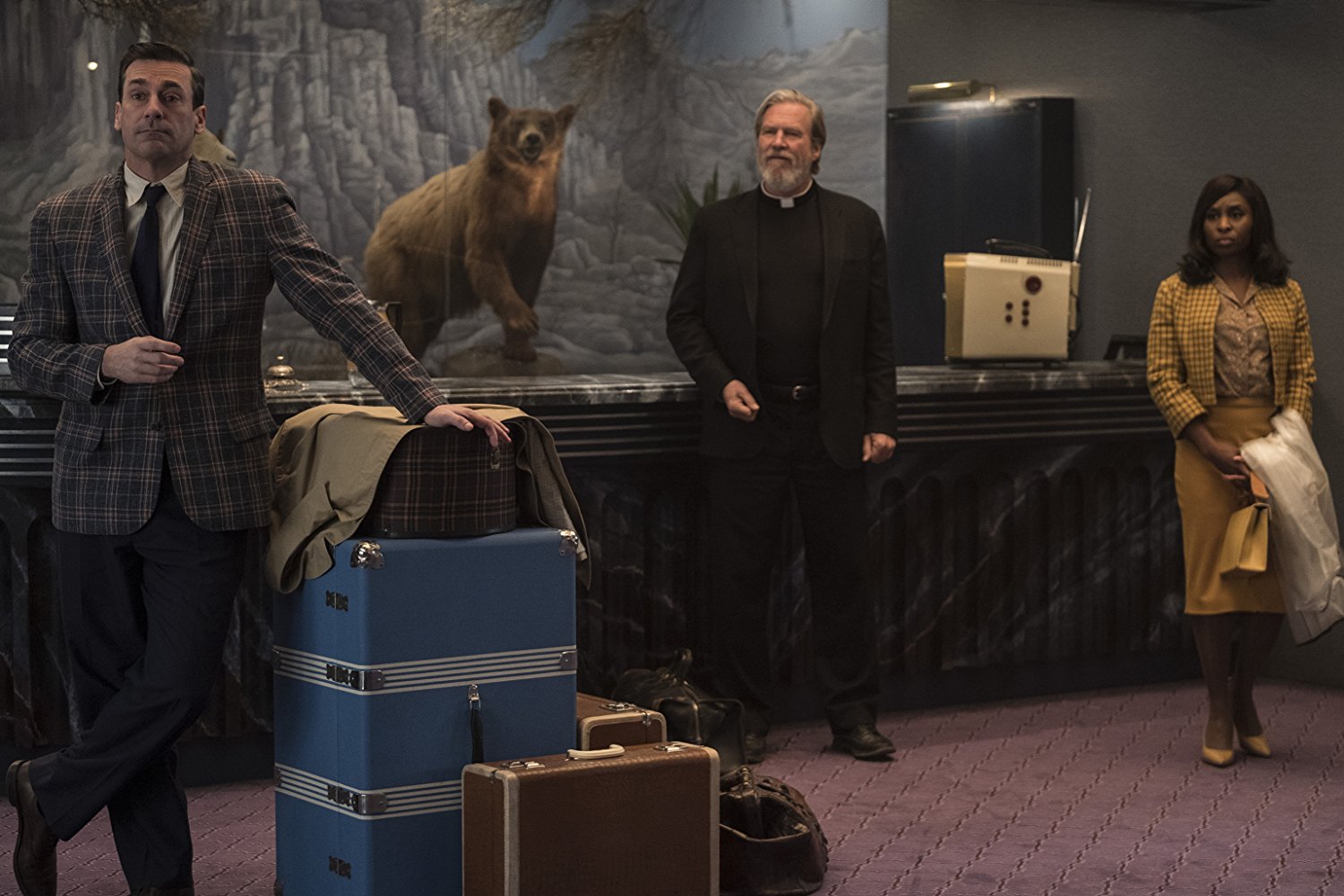 Some of the people that are in the film.

The film is set at the titular El Royale, a hotel which straddles the California-Nevada border. This plot point is completely irrelevant to the film. Some people (including Kevin Flynn from Tron and the final baddie from Baby Driver) come to stay at this hotel for a variety of reasons, but funnily enough they’re all hiding secrets of some sort. For example, Darlene can sing really well and is wearing a wig - proper scandalous stuff.

While it took a little while to get going, once it started to pile on the intrigue I was getting drawn in. The bits with Jon Hamm being all espionagey (he was a spy the whole time!) were a particular favourite of mine - Cold War spy aesthetic is the best aesthetic! He’s there to recover some FBI bugs but finds ones that aren’t theirs! What’s going on? [2] He also finds that the mirrors in the rooms are actually one-way mirrors and the hotel have been filming some of the shenanigans that are going on in the hotel! He also sees one of the characters (the lady from Fifty Shades!) apparently kidnapping a young girl, so of course he goes to save her against President Hoover’s orders and gets shot in the face. 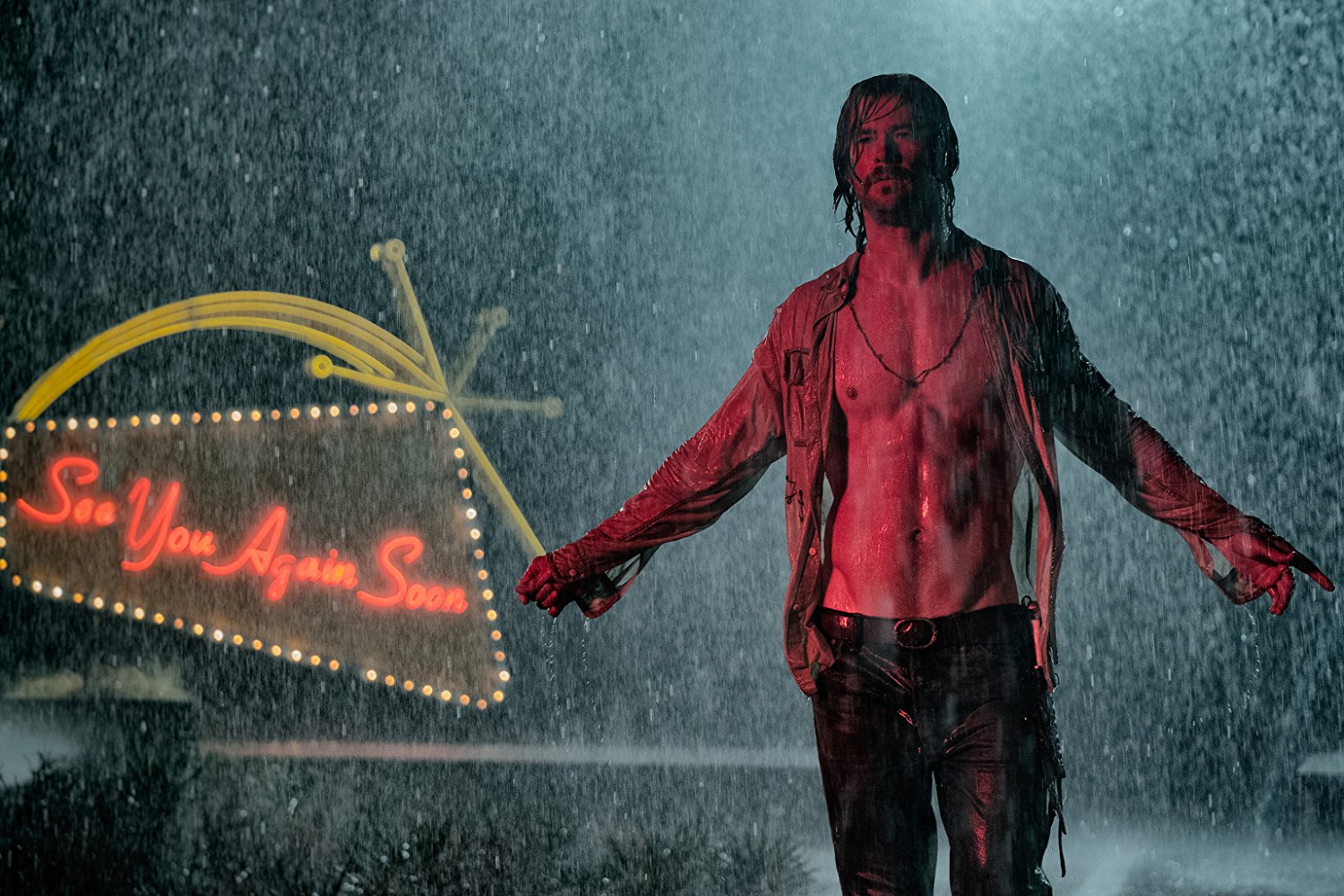 As the film approaches its climax it starts to get a bit weird, and then Chris Hemsworth shows up out of nowhere playing a guy called Billie Jean or something. Although he’s in a lot of the promotional material, I had forgotten that he was in the film so was genuinely surprised to see him rock up. As is tradition, he doesn’t seem to wear many clothes, and gets naked in his first scene! He plays a strange hippie cult leader, and turns out to be the big bad of the film. He’s not a very nice man, and kills some people! The reason he’s there is because the Fifty Shades lady ran away from his cult, taking her brainwashed sister with her. Unfortunately the brainwashing was so good that the sister told Billie Jean where they had gone!

Pretty much everyone dies by the end, so the title of the film is fairly apt. I would not recommend the El Royale on TripAdvisor! The film, on the other hand, is definitely deserving of a recommendation! It wasn’t as edgy as I thought it would be - while the plot isn’t entirely straightforward (there are flashbacks peppered through, sometimes for no reason), it’s not too artsy and flashbacks are in right now anyway. One downside I feel is that the film might lack some replay value once you know all of the mysteries. However it might be one of those films where you notice new things each time you watch it - as I’ve only watched it once I can’t confirm or deny this.

As always, there was a large wait at Five Ways because the train was delayed - a post-Cineworld classic! I then returned home to discover that everything was suddenly much spookier in my living room! But that’s a story for another time.

Bad Times at the El Royale gets 4/5 Yayes from Kaye!