George Kaye
GitHub
Blog
GitHub
Blog
Adventures in Academia
Part One
Todd has recently started his PhD, whereas I am still working hard in the final year of my MSci. Together we eat soup, visit pubs and struggle with second-year functional programming assignments. This time we embarked on a soupy lunch in Sloman which turned into so much more.
09 Oct 2018 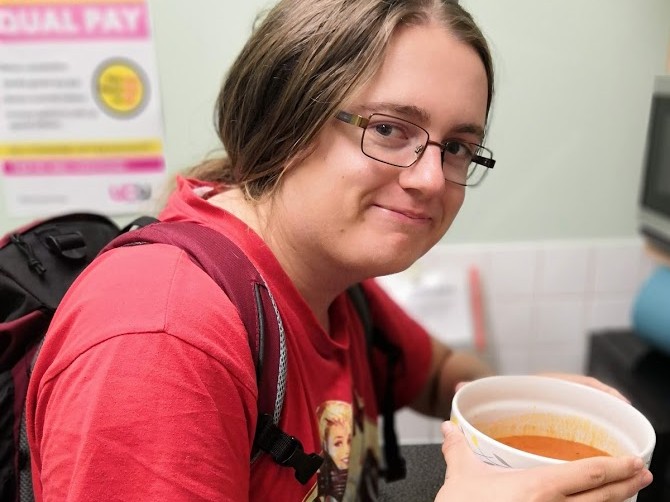 Todd eagerly invited me to a ‘soupy lunch in Sloman’, so of course I could not refuse! I had previously accompanied Todd to big Sainsburys as he purchased the soup of the day, where I had also obtained a one hundred pack of Twining’s Lady Grey teabags for £3.50 - a bargain!

I arrived at Todd’s office with urgency, straight from my Evaluation Methods and Statistics lecture (which had turned out to be suspiciously HCI-oriented, but that’s a story for another time). We then wayfared to the first floor staff kitchen! To my amazement, Todd did not own some sort of plastic microwave bowl - an essential for anyone embarking on any soup-related mission! I promptly recommended that he purchase a Sistema bowl, and found one on Amazon for the low low price of £4.99.

Alas, this bowl could not come soon enough! Todd frantically searched the cupboards for bowls, but they were all too small. We ventured downstairs on our quest, but no bowls could be found there either, only a strong fishy smell. We returned in shame to the first floor kitchen, and Todd riskily opened the running dishwasher to be sprayed with boiling hot steam. But there were no bowls! The only thing remotely feasible was a china casserole dish - it would have to do. 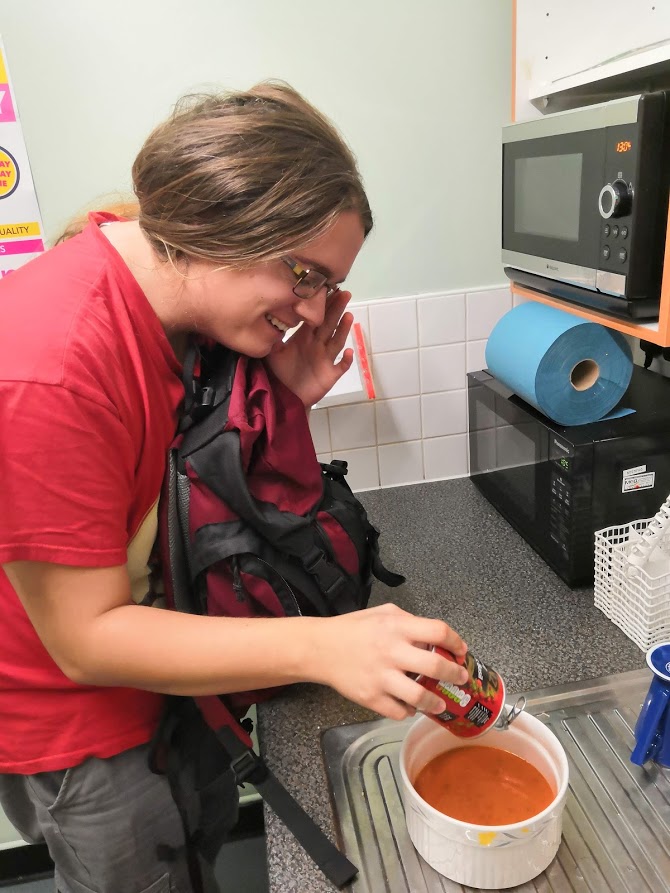 Todd bunged his soup into the microwave and set it going (ensuring that it was not set to the ‘warm’ setting - a microwave crime!). It was at this point that people started coming in and out of the kitchen at alarming frequency. When the casserole dish was removed from the microwave, things got worse: the legendary Andrew Howes (head of CS!) entered the room and observed the casserole dish with a smirk on his face. Fortunately Todd and I managed to banter the embarrassment away with aplomb.

I was also distraught to find that the CS building used milk bottles from the milkman rather than the traditional plastic supermarket variety. I was forced to contend with the strange foil lid which apparently kept it fresh. This milk was then applied to our cups of Lady Grey, although a large amount was spilt due to a mix of poor motor skills and poor bottle design! It also turned out that Todd’s ‘insulated’ uni cup was anything but, and caused a large amount of discomfort to me as I held it.

It was now time to descend to Sloman. Todd clutched his hot casserole dish and I sported two cups of tea and we went on our way. Many doors blocked our path but with a mix of ingenuity and people opening them for us, we made it to our destination - it was finally soup time.

But not really! Because I wasn’t even eating soup - I had leftover sausage ‘n’ spinach pasta from yesterday. It had kept better than I had expected! But the last surprise of the day was still yet to hit us. It turned out that the PhD cookie break was happening at that exact moment in the Sloman Lounge! Although Todd was of course welcome to this inner circle of quite clever people, I felt that I should keep a low profile lest they discover my lowly undergraduate status. It turned out this was unnecessary as I was offered biscuits at a fantastic rate, and even invited to ‘join the circle’ - a great honour! However I declined since I had a lecture anyway and was not ready for this privilege.

Next time: F N C at the Country Girl!